Banana Pi M2 with Gigabit ethernet port, It can run with Android 4.4 smoothly. The size of Banana Pi M2 same as Banana Pi M1, it can easily run with the game it support 1080P high definition video output, the GPIO compatible with Raspberry Pi B+ and can run the ROM Image.

Note: Banana Pi M2 not support sata port, so you need use USB for hardisk 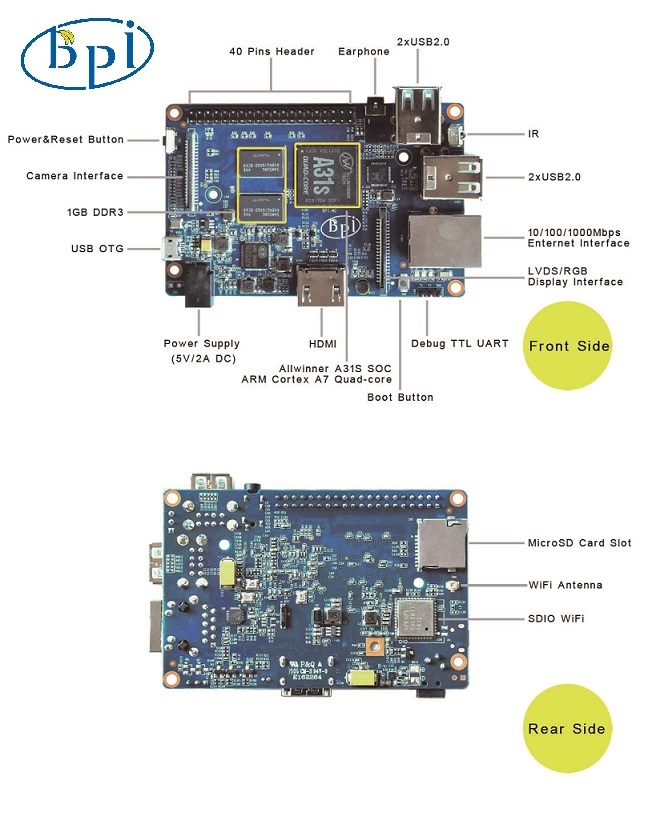 Banana Pi has a 40-pin GPIO header that matches that of the Model B+ Raspberry Pi. Following is the Banana Pi GPIO Pinout:

The CSI Camera Connector is a 40-pin FPC connector which can connect external camera module with proper signal pin mappings.  The pin definitions of the CSI interface are shown as below. This is marked on the Banana Pi board as “CN6″.

The LVDS Connector is a 40-pin FPC connector which can connect external LCD panel (LVDS) and touch screen (I2C) module as well.  The pin definitions of this connector are shown as below. This is marked on the Banana Pi board as “CN9″.

The header CON8 is the UART interface.  For developers of Banana Pi, this is an easy way to get the UART console output to check the system status and log message.